Which Loft Boards Should I Use?

In this article, one of our experienced loft boarding specialists discusses the different types of boards that you can use in a loft. We’re often asked “I want to board my loft but, which loft boards should I use?” or ‘which boards are most suitable for my loft?”, we hope that the following information can help, so that you can choose the boards that are best for your property. 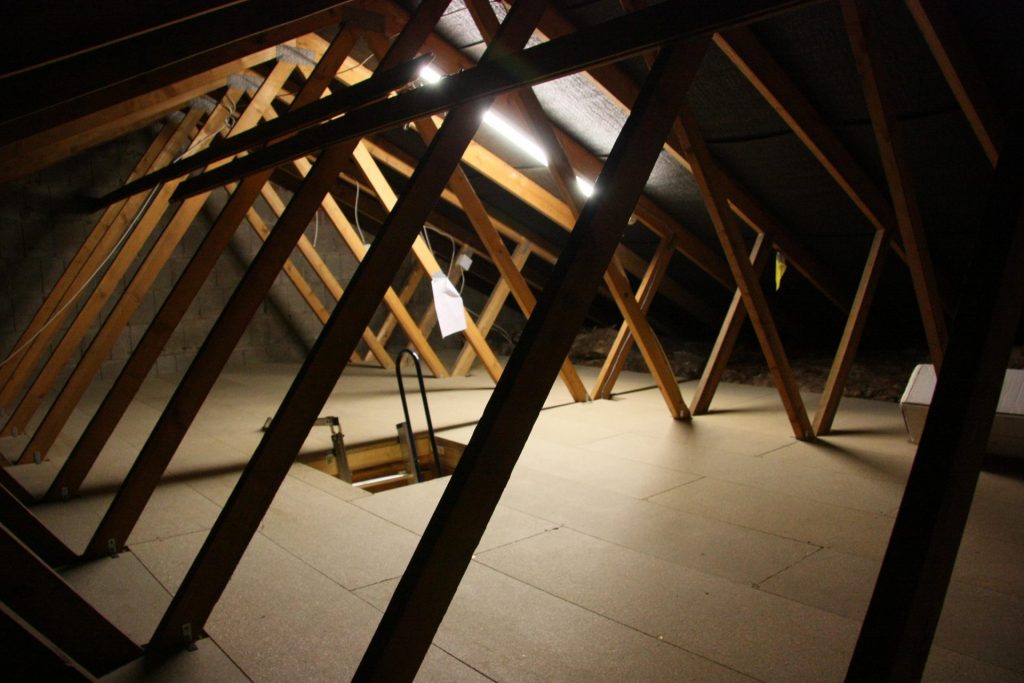 The most common loft boards used for DIY in the UK are 1220 x 325 x 18mm P5 tongue-and-groove chipboard loft boards (also called loft panels), in packs of 3. (We’ll explain what all these terms mean below). These are the boards which we normally sell with our kits online in our store.

But whilst chipboard is widely used in the UK, in many of our export markets, it’s less common. For example, in the USA and Canada, OSB and plywood are much more frequently used for loft boards than chipboard, so read on for info about these, too!

Note that one place that sells all the boards below, for home delivery, is Roofing Superstore.

Chipboard (called Particle Board in most other countries) is made from taking waste wood particles generated in timber saw mills, such as chips, shavings and even sawdust, mixing them with chemical resins and glues, then pressing and heating them together to make the final board. It’s good for the environment that it’s using waste wood, but (unlike our LoftZone StoreFloor parts), it’s not recyclable, since the resins and glues mean it can’t be mixed with other wood products, and so at the end of its life, it mostly goes into landfill.

Boards can come in lots of sizes, the most common being 1220mm long x 325mm wide x 18mm thick, but it’s also possible to get them in much larger sizes, such as 2400 x 600 x 18mm. Larger boards mean less time required to complete your floor, but you will need two strong people to carry these boards and they may not easily fit up a tight staircase or through a small loft hatch.

It’s also possible to buy boards that are 22mm thick, but not many people need the extra strength from the increased thickness and they do add unwanted weight to the floor. Indeed, even with 18mm boards, weight is one of the biggest disadvantages of chipboard – they weigh about 12kg/m2, which is double OSB and plywood. This isn’t usually a problem but may be if your roof is particularly weak. 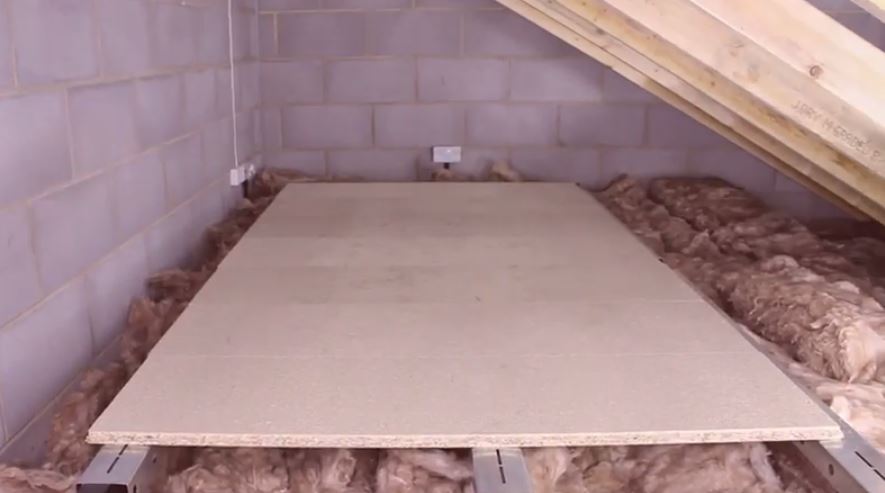 Chipboard grades vary from P1 to P7: the higher the number, the stronger the board. For example, P2 and P3 are for furniture whilst P4 and above are load bearing. Some boards are moisture-resistant, but you generally don’t need this in a loft. If you have a damp issue in your loft then this could affect the whole timber structure so we would recommend that you solve the damp problem before fitting any boards.

Tongue-and-groove means that the edges of the boards have a recess on one side and a section sticking out on the other side, and these slot into each other as you lay your floor. the tongues and grooves are usually only on the long sides of the smaller boards, but can be on all four sides of larger boards. The tongue and groove does not affect the strength of the deck but it makes it stiffer, and keeps the joints level across the deck, so most people take advantage of this feature. If you want to ever lift up any boards in the future however, e.g. to access a pipe or wiring below, then with tongue-and-groove you will have to lift up the whole row. So if that’s likely to be the case, then you may choose to use boards without tongue-and-groove. We don’t sell these but most DIY stores or builders merchants do.

Before LoftZone was invented, people used to stagger the boards when they laid them, so that the end of each board was half way along the length of the next one. This does make the overall floor a little bit stronger but it also involves a lot of cutting of boards. Unless you’re using one of our decks that is 1.8m wide, where you have to cut some of the boards anyway, we don’t recommend staggering the boards – it’s a lot of extra effort for very little gain.

Finally, there is only one manufacturer of chipboard loft panels in the UK, in Devon, and it’s their products that we sell. However some DIY stores source their panels from Scandinavia. You can tell the difference, because the UK boards are 325mm wide and the Scandinavian ones only 320mm wide.

An alternative to chipboard is Oriented Strand Board, which was invented in California in the 1960s. It’s similar to chipboard in that small pieces of wood are mixed with resin and compressed into shape, but instead of using particles of wood, strands are used which are all oriented into one direction with lots of layers, each laid above and at right angles to the previous one. Like chipboard, they are usually not accepted by councils for recycling.

OSB is stronger and more durable than chipboard, and some people like the look of it more, too. There are 5 grades of OSB, numbered OSB/0 to OSB/4; grades 2-4 are all load-bearing and any of these will be suitable for a loft. If you use OSB, make sure that the surface finish is smooth, sometimes OSB boards can be rough and that’s not usually acceptable if you want to walk on them. 18mm thick OSB boards weigh around 7kg/m2, almost half that of chipboard.

Guess what, OSB is more expensive than chipboard, but prices can vary a lot, so it pays to shop around. At the time of writing (April 2020), we found DIY stores selling 18mm thick tongue-and-groove OSB/3 at £12.50/m2 but builders merchants were selling them for £7.50/m2.

As it’s stronger, you could also choose to have a board that is thinner than 18mm. Because OSB strengths can vary a lot, depending on the wood and glue used, always check the strength of any boards you buy before you use them. But, for example, the leading USA DIY store chain sells OSB attic boards that are about 15mm thick. However, 15mm can sometimes be harder to source from DIY stores in the UK, so you may need to visit a builders merchant to find them. We would not recommend boards thinner than that for loft flooring. 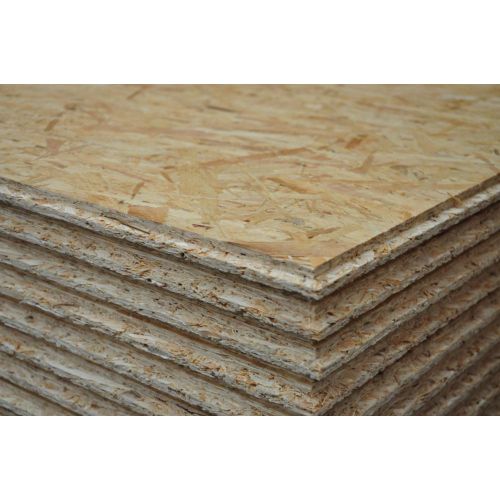 A typical OSB board, here showing the tongue-and-groove arrangement on all four edges

Some LoftZone customers, particularly in North America, prefer to use plywood for their loft flooring.

Plywood is manufactured in a completely different process than chipboard or OSB. Felled trees are rotated and thin layers of wood are peeled away to form sheets of veneer. These sheets are cut, dried, glued together and baked at a high temperature and pressure to form a panel. They use far less glue than chipboard or OSB, and can therefore be more easily recycled, but they require bigger trees from older forests than OSB, which can use quick-grown smaller-diameter trees such as poplars. (Note that chipboard uses particles and dust from lots of different types of wood).

Plywood is stronger (stiffer) than chipboard and, depending on the type of plywood used, it is generally as strong as, or stronger than, OSB. It also has a perception amongst many people of being higher quality and it looks more like wood than the other products we have described here. You should use ‘structural’ plywood, not ‘non-structural’ plywood, as the structural type has greater load bearing properties, suitable for walking on. It comes in various alphabetical grades starting at A, with A being the best surface finish and fewest knots. Anything in grades A to C would be fine in a loft. Plywood weighs around the same as OSB, i.e. about half the weight of chipboard. 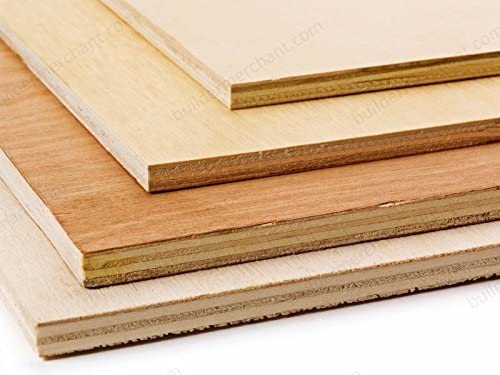 Some examples of plywood. Lots of different woods, and numbers of layers, are available.

Like OSB, plywood does not usually come in the small loft board sizes that you can find in chipboard, so you’ll have to buy bigger sheets, and cut them if you need smaller pieces. It is available in tongue and groove, around the edges of the large sheets.

You’ve guessed it, plywood is more expensive than either chipboard or OSB; we found both DIY stores and builders merchants selling 18mm thick tongue-and-groove structural plywood at around £13/m2. As it’s stronger than either chipboard or OSB, you can use a thinner sheet. The strength of plywood varies considerably according to the wood and glues used, so you should always check the specifications before buying anything. But as a guide, Metsa, who supply a lot of plywood in the UK, state that if you want their spruce plywood tongue-and-groove board to be able to take a permanent weight of 500kg/m2 (the same strength as LoftZone StoreFloor with 18mm chipboard flooring), then you only need 12mm thick plywood if your joists are 400mm apart, but 18mm if your joists are 600mm apart. To support 400kg/m2 the thicknesses are 12mm and 15mm respectively. (Source: Table 2.4 here).

Please note that most roofs are not rated to take anything like these loads, but we designed our LoftZone system to be super-strong.

Finally, please note that we haven’t talked about Medium-Density Fibreboard (MDF). This product is too weak to be used as a loft board, and not easy to screw into either, so we wouldn’t recommend it for this purpose.

To find DIY LoftZone kits with (or without) boards, please visit our shop to browse the specifications of our products. We also offer local LoftZone Authorised Installers in your area that are happy to help install and advise on your loft boarding.